Dutch soccer player Johan Cruijff has passed away. Cruijff was not only a brilliant player, but he was also a marvellous talent developer. Different professional soccer players are grateful to him because he boosted their professional careers.

Which techniques did Cruijff apply in order to develop his players’ talents? How can managers apply these techniques at work? These questions are addressed in the book ‘Managing talent development (in Dutch: Leidinggeven aan talentontwikkeling) that will be published on april 7, 2016. The book unravels the mysteries of important topsport coaches.

People do not only learn during their childhood. They also learn a lot at work. How they learn at work is highly dependent on their supervisor. Does he create a good team atmosphere? Does he help people develop their strong points?

Mirjam Baars, author of the book, finished a PhD on talent development in 2003. She wondered which evidence-based techniques top sport coaches apply in order to develop their players’ talents. She also wondered which techniques are used by successful managers. For this reason she both analyzed the techniques of topsport coaches and spoke to successful managers of learning companies like TomTom, ICT-company TOPdesk and Tilburg University. She gained important insights. Managers, for example, are used to think that employees learn best by offering courses. This turns out not to be the case. Employees learn much quicker and more effectively in the workplace. This however depends very much on the degree in which the manager is talent oriented.

1) They are learning examples

Cruijff was developing himself on a continuous basis. When he as a young boy, he was obsessed by playing soccer. He used to play the game all the time when he was not at school. Later on he also developed golfing skills. He participated in golf tournaments and developed a handicap in 2006 of 35,3.

By being a learning example himself, Cruijff was a role model for his players. This role modelling is practised by other topsport coaches as well, like Guus Hiddink (a Dutch soccer trainer/coach). Hiddink is famous because he learned the Spanish language before he went to Spain. He didn’t need an interpreter when he arrived in Spain. In this way he gained a lot of respect from the Spanish players. 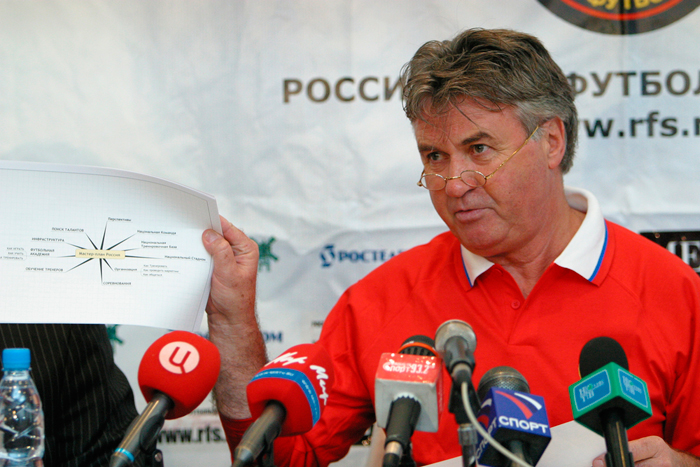 Guus Hiddink learned the Spanish language prior to coaching in Spain.

In science, this form of leadership is characterized as authentic leadership. Authentic leaders have a positive attitude, high self consciousness, high moral values and they are brilliant in building trustful relationships with other people (Avolio, Luthans & Walumba, 2004).

The fact that authentic leaders have a positive attitude leads to a positive atmosphere in the team. Researchers characterize this phenomenon as ‘emotional infection’ (Sy, Côté & Saveedra, 2005).

2) They are consciously looking for players’ strong characteristics

Cruijff was a wonderful talent spotter. When he was a technical advisor for Leo Beenhakker (a Dutch trainer/coach) he spotted the talent of soccer player Frank Rijkaard. Cruijff was also the person who stimulated Rijkaard to develop himself as a trainer. Inspired by Cruijff, Rijkaard initiated important changes at FC Barcelona between 2003 and 2008.

3) They ensure a good team atmosphere

Cruijff was brilliant in ensuring a good team atmosphere. When he was young, he played games during training sessions on a regular basis. Once he and another Dutch player, Piet Keizer, bought some mice at the pet shop. They put those mice in the ice hats of the team players. This led to some hilarious moments.

Johan Cruijff recently passed away. He was a brilliant talent developer.

In science, taking care of a good team atmosphere is characterized as developing ‘good team cohesion’. Team cohesion is considered as a feeling that one belongs to a certain group and that one shares the values of this group (Bollen & Hoyle, 1990).

The advantage of team cohesion is that players feel a strong bond and that it stimulates the team learning process.

Cruijff is well known for the fact that he was trying to improve soccer on a continuous basis. He introduced ‘offensive play’ according to the 3-4-3 principle. He also reformed the education for youth soccer.

Marc Lammers (a Dutch Olympic hockey topsport coach) also worked with small innovations on a continuous basis. He states that you need to catch 2 per cent profit in topsport each time by introducing small innovations.

Scientific research shows that whenever managers are active players in their own development, this behavior is contagious. Employees ‘copy paste’ this behavior unconsciously. This has an added value for their personal development.

The most important lesson for managers? Managers, like top sport coaches such as Johan Cruijff, have to pay attention to both individual talent development of their team members as well as taking care of a good team atmosphere. When you combine both, you can make use of the talents of all your team members in an optimal way. A famous Cruijff quote on this subject is: ‘What would you prefer? One good group of eleven players or eleven good individual players?